Prince Norgah representing the Western Region of Ghana defied all odds and turned defeat into victory, when he came back from a 0-2 score in the second round to win 3-2 by the fifth and final round.

Before reaching the final to beat Otonne Oke Sunday from Nigeria who got the second position, he had to beat equally good opponents which proved that the game of Snooker or Pool is developing fast in Ghana.

Isaac Mensah of Amarula Ghana, one of the sponsors said he was impressed with the turnout and the interest shown in the sport.

Jude Martins of Hunters Cider who represented the winner’s prize commended the organisers for putting up a great event and promised t continue to support the lesser known sports.

Nudzor Agbanu aka Candyman, CEO of AfroDigital Media, organisers of the National Hunters Pool Tournament since its inception praised the players who showed maturity in tensed moments as they made security work easy.

He also commended the media who stayed to witness the finals and presentation of prizes to winners.

He appealed to other companies to join and support the least financed sports as most of the general public enjoy some unpopular games, but gradually Pool is becoming visible in Pubs, Night Clubs and some recreational centers. 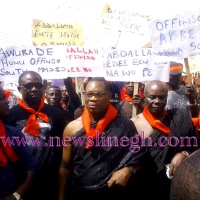