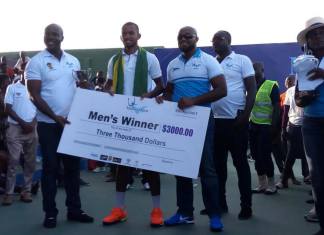 Togolese Thomas Sethodji, the number one seed at the McDan West African Open emerged winner at the 2017 edition which took place last Saturday at the Accra Sports Stadium.

After he defeated Felix Hounkpevi from Benin by two seats, to take home $3,000, plus Tennis shoes and rackets from Babolar and products from sponsors.

The France based Sethodji who claime his grand mother is Ghanaian and enjoyed the support of Ghanaians at the tournament said he prepared well for the event and very happy giving thanks and praises to God Almighty.

He hailed the general organization of the tournament and was impressed with the cash prize which he hopes to use wisely to invest in himself and his profession, by paying for the expenses to cover his next tournament.

He thanked the organisers and the CEO of McDan Group for his sense of patriotism and nationalism to ensure that the youth of Ghana do some sports.
Powerful Sarah Adegoke beat Angel Mcleod in an all Nigeria affair in the Ladies final. The winners took home a cash prize of $3,000 and sponsors products.

Event Organizers, Nathaniel Attoh thanked all who attended the show and commended the sponsors for their support.

Dr. Dan McKorley, the brain behind the successful event commended the media and the loyal organizers who put up the six- day tournament.

Ghana’s Jeff Bagerbaseh who was third said he made some mistake against Felix Hounkpevi, but hopes to comeback in a better form to win.

Angel Mcleod who shed tears because she could not win was optimistic of beating her rival to annex the title next time.