The Weija-Gbawe Municipal Assembly (WGMA) has sounded a strong warning to one Aburakari Sadique of Mallam Junction in Accra, to desist from what the Assembly termed as “His unwarranted trespassing and harassment activities” in the municipality, or have himself blamed.

“We strongly advise that you discontinue your offensive conduct in order to forestall any further legal  brawls!”, the Assembly sounded.

This was contained in a warning notice from the office of the municipal administration of the Assembly, stumbled upon by our roving scouts.

Dated 27th June, 2022, with reference No. GMA/AD1/21/20 and headlined “Notice to cease and Desist,” the notice was signed by madam Mercy Quansah, Municipal Coordinating Director of the Assembly.

In the six-point notice, it stated that the Assembly had received a compliant of trespass and harassment against Abubakari Sadique Alias Abbas, that he had unlawfully entered the territory of one George Kwartey Quartey at Mallam Junction to operate a lorry station on the land.

According to the notice, Abbas did this without permission from George Kwatey Quartey, and when he was confronted, Abbas hired thugs to intimidate him, his workmen, agents and assigns.

“This notice has been served as a warning notice of your unwarranted trespassing and harassment activities. The Assembly hereby directs that you shall desist from carrying out your operations and activities on the land or territory above mentioned.

You are further directed to remove from the said land all personal properties, chattels or other improvements, waste and debris” the notice contained.

Continuing, the notice sounded, “ Take notice that failure to comply with the above directives may without further notice, result in further enforcement including persecution, confiscation and disposal of any personal properties, chattels or other improvements.

We strongly advise that you discontinue your offensive conduct in order to forestall any further brawls!, be advised accordingly!” it conduced.

When we visited the place around 10:00am June 28, 2022, Abbas had mounted his table on the pavement at the place collecting monies from drivers around.

Upon seeing George Quartey, he traded insults and threats with him.

Abbas, who also laying claim to be Chief at Mallam Junction, is reported to be congesting the place with all manner of structures, by collecting monies from their owners before placing their containers there.

Also, he is reported to be collecting money from drivers, while harassing others; thus making the place a hell. It is against this background that the Assembly has written this notice, we gathered. 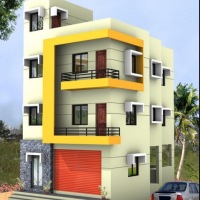