The Member of Parliament for Sefwi- Akoatombra Constituency in the Western Region, Hon. Alex Tetteh Djornobuah, has urged the newly elect national executives of the governing NPP to unify the party and make it stronger to maintain power in 2020.

According to him, with the caliber of the new crop of executives, he has no doubt that they would work hard to maintain power.

He however, added that it’s incumbent on the new team to ensure a united party capable of working in unison to ensure the general welfare of the members at the grassroots.

Speaking with this Reporter in an interview, Hon. Djornobuah, said he is hopeful that with the rich background of the executives, the party would be the major beneficiary at the end of the day.

He urged members who contested in the national conference, both winners and losers, to close ranks and work for the good of the party, saying the concerns of the grassroots must be the concern of the new executives.

“You have an arduous task to ensure a strong base of the party”. He added.

He also waded into the controversial 275 buses for each constituency, purchased by the new Chairman Freddie Blay, dispelling  accusations that an effort by the chairman to resource the various constituencies was an attempt of vote buying.

He pointed out that the generosity of people to support the party at the constituency level must be encouraged, and he is in full support of innovative ways to resource the constituencies because the challenges they face are worrying and pathetic.

Hon. Djornobuah added that people who suspects any acts of corruption by individuals to resource the party can go to court and challenge such acts. 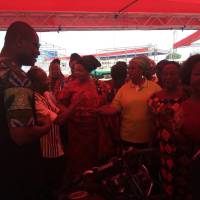