Under the auspices of Peasant Farmers’ Association and the Ministry of Food and Agriculture, members of the Association and all small holder farming experts from across the country have met to identify challenges and deliberated on modes to increase farmers’ access to quality seed and fertilizers for a sustainable enterprises in Ghana.

This swift meeting was also to discuss the sovereignty of a small holder farmer, develop more inclusive and innovation platforms, and sustainable landscapes, using the projects as their focal points

The Peasant Farmers Association of Ghana (PFAG) with support of the Alliance for a Green Revolution in Africa (AGRA) will be implementing a project which aims at ensuring that farmers have access to quality inputs leading to increase in higher productivity, market access and sustainable incomes. Specifically, the project seeks to ensure Proper Policies, laws and regulatory frameworks that promote farmers’ access to quality inputs through campaigns and policy advocacy.

Professor Joseph Yaro of the Department of Geography, University of Ghana, had disclose this in a presentation delivered during a sensitization workshop on farmer’s access to quality inputs by the Peasant Farmers Association of Ghana (PFAG), held in Accra. 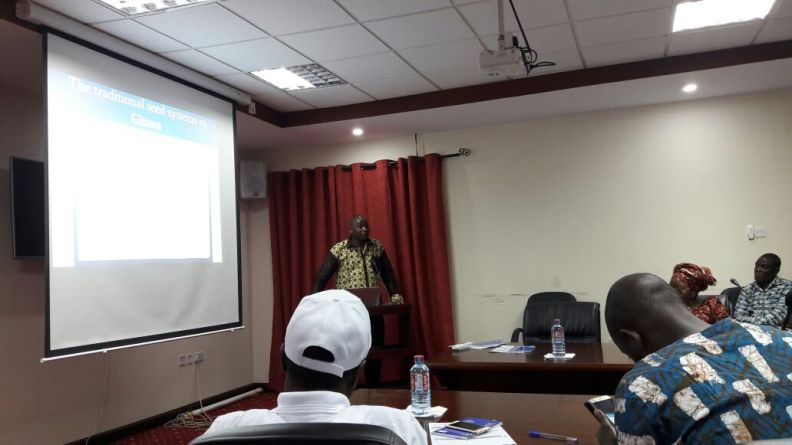 Though, He said, Agriculture is expected to lead the growth and structural transformation of the Ghanaian economy and maximize the benefits of accelerated growth, however, smallholders are constrained in their ability to increase food production and maximize their welfare due mainly to poor access to good quality seeds and fertilizers.

Policies that aimed at modernizing agriculture in Ghana especially in the seed and fertilizer sectors have been slow and ineffective due to a host of implementation issues, because the gap between policies, programs and implemented strategies in the input sector has left the smallholder at the mercies of inefficient markets for inputs. He noted.

The commercial private input sector has not been able to provide easy access to affordable and desirable seeds and fertilisers at the right times and locations. Rather traditional mechanisms of access pre-dominate the seed sector, while the fertilizer sector struggles with distributional problems.

The poor access to fertilisers is mainly due to the market cost and administrative difficulties in accessing subsidized fertilisers.

The Plants and Fertilizer Act passed by Parliament of Ghana in 2010, He said, has been promising in changing the face of the agricultural sector, which has the potential to strengthen both public and private channels through which farmers can access quality seeds and fertilizers.

Reiterating that, relying mainly on private control of the sector may destroy the gains made. Hence government involvement, with the aid of donors is critical for an effective alliance.

“Soil impoverishment is a major problem for agricultural productivity in Ghana. However, fertilizer use in the country is still limited and farmers generally are unable to access enough quantities of the commodity to enhance yields due to mainly to high prices and poor distribution systems”. Professor Yaro emphasized.

According to a survey done in 2016, only 59% of the farmers interviewed applied fertilizer on their farms. Farmers in the savannah zone of Ghana were more likely to apply fertiliser than their counterparts in the forest zone because most of the soils are degraded in the north.

“The proportion of farmers applying fertiliser was higher in the Upper East region with a percentage of 93.5%, followed by Northern region which is 87.5%, Brong Ahafo region also had 40.4% where Ashanti region recorded the lowest with 22.1%, whereas, Fertilizers were more likely to be applied in the cultivation of pepper with 100%, rice also hitting 84% and maize is 64%. State promoted export crops such as cocoa received special state support of fertilizers”. He revealed.

” A poor public and private extension system prevents the diffusion of modern innovation and the incentives to adopt modern varieties and farming practices, which are necessary for the survival of the private input value chains”.

Though the good intentions of state policies, He said, have not translated into a booming agricultural sector due to poor financing and ineffective strategies. Policy needs to take into consideration the characteristics of the individual farmers, the type of crops grown, the scale of operation, and the level of development and integration into global markets. Specific interventions, rather than only broad strategies will serve best in enhancing productivity based on the different needs and capacities.

Professor Joseph Yaro therefore recommended that, partnership with the private sector to distribute fertiliser should include a price regulation system of maximum ceilings to prevent them from overpricing following negotiated lower bulk purchase prices and transport agreements. Also a system of ensuring nationwide standard pricing must be instituted during annual meetings between the state and private stakeholders

“Government also needs to formulate appropriate strategies and implementation capacities to translate the laudable policies into reality. Adequate resources for implementation are critical, given the high levels of poverty and illiteracy among farmers, the role of the state in the diffusion of innovation is paramount. Hence the state must work with the private sector in making inputs and technical knowledge available to farmers”. He stated.

Also, Collaboration with neighbouring countries for research into new appropriate crop varieties and methods of cultivation is needed to reduce the financial challenges in funding public institutions. The resultant division of labour and massive funding will also help with alignment of policies across the sub-region.

MOFA and NGOs should aim at forming Farmer Based Organisations for the production of seeds with a national cooperative and credit union umbrella to regulate, promote, finance and enhance a local seed industry. He added.

Survey; Ghana ranked the most expensive country in Africa to reside

MoveHub, an international relocation company has rated Ghana as the most expensive country to live in on the African continent. MoveHub based its assessment on a range of Read More