A-52-year old man has been assaulted by members of a National Democratic Congress vigilante group at Fumso for making gestures suggesting change at the convoy of President Mahama.

Nana Akwasi Gyamerah, a native of Kuntenase in the Bosomtwe District of Ashanti region made the gestures at President Mahama’s convoy as he was returning from Apagya in the Adansi South District at the beginning of a 4-day campaign tour of the Ashanti region.

Nana Gyamerah who was on his way to a cousin’s funeral at Fumso said four stout-looking men moving with the convoy the Kumasi-Cape Coast road, cornered him shortly after showing the gesture. It involved making two fists and rolling each over the other.

The men who were in green NDC T-shirt onboard an American Ford vehicle with registration GW 9607-14  landed some blows and slaps at the anti-government supporter.

It took the intervention of a lotto seller and a military officer to desuade the men from further attacks. By now Nana had fallen to the ground in his funeral cloth.

Nana Gyamera told Nhyira FM he feels pains in his chest and his cheeks .The family is disappointed by the show of aggression and threatened to escalate the matter.

His nephew, Asiedu Kofi Abraham said he was also assaulted by the ‘machomen’ in his bid to rescue his uncle.

According to him, the family will pursue the case to its logical conclusion. “This matter will not end here. Even if we have to go to court, we will go. If we should go to Otumfuo [Asantehene], we will go. My uncle is in pains,” he insisted

Meanwhile, the Ashanti Regional NDC campaign team is not surprised at the conduct of Nana Gyamerah and several others who did same.

Spokesperson, Samed Akalilu says the party will investigate the assault case once it comes to its attention.

“That has not come to my attention so it would be difficult for me to pass a verdict or comment.”

According to him, President John Dramani Mahama runs one of the most decent campaigns ahead of 2016 elections.

“We run one of the most disciplined and most decent campaigns in recent time. John Mahama represents peace.He has always said this that he’s not divisive, he’s not diabolic ; he loves his people and he has united Ghana and everybody who follows John Dramani Mahama tries to  emulates his behavior, he explained”

Meanwhile, the Fumso police have launched investigations after it issued Nana Gyamerah with a medical form. 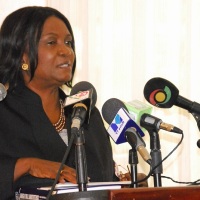