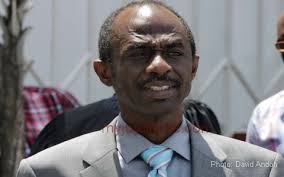 The General Secretary of the National Democratic Congress (NDC), Johnson Asiedu Nketia, has said though he’s aware death is inevitable for all human beings his prayer has always been that he doesn’t die through a car crash.

He survived an accident unhurt on Sunday after his vehicle hit a taxi on the Kintampo-Techiman road in the Brong Ahafo Region.

General Mosquito, as he is commonly known, was traveling to Kumasi with other NDC members when a Daewoo Matiz with registration number BA 2507-14 rammed into his Toyota Land Cruiser vehicle.

The driver of the taxi sustained severe injuries and was rushed to the hospital for treatment.

Mr. Asiedu Nketia , later while addressing a crowd of NDC supporters stated that a motor accident is surely not the way through which he’ll join his maker.

“I heard on radio that I’ve I have been involved in an accident on the Tamale road. That is very true, but as it is well known to most people, I will certainly not die through accident.”

0 comments on “I will not die through Accident – Asiedu Nketia”

This Sunday is “Popcorn Day” here’s how to get the most of the celebration!!!

Finally, a day dedicated to watching all the best movies! Celebrate Popcorn Day on Sunday the 19th of January with a big ol’ bowl of popcorn and our pick of the eight best family movies.

Accra-based artist Copta just released a new EP titled ‘Rosso Forever’ containing 7 tracks, including hit single ’Aseti’ ft. Magnom. Back in October, Copta hinted at a new project on the way. Rosso Forever is the 2nd part in the Rosso album trilogy, following the release of ’Rosso On The Way’.

Alphonse Menyo is an award-winning actor and producer who began his acting career in 2009 with stage drama. His professional acting career began in 2015 when he played a major role in the “Freetown” movie which was produced by American filmmakers Garrett Batty and Adam Abel.