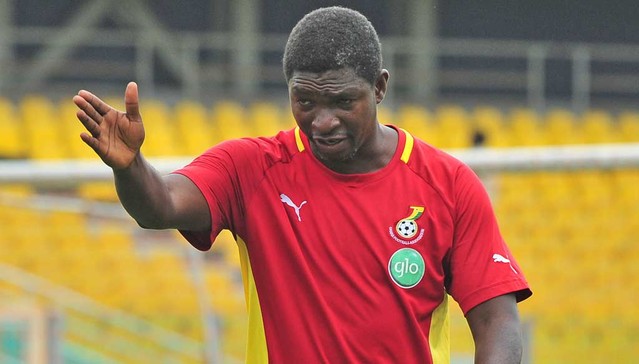 Deputy Ghana coach Maxwell Konadu has tipped his side to dispatch Uganda in their 2018 Fifa World Cup qualifying encounter on October 7.

The Black Stars are set to host the Cranes at the Tamale Sports Stadium in what will be the Group E opener.

Ghana beat Comoros over two legs to reach the third and final round whereas Uganda accounted for Togo.

“I think as we all know, [the clash against] Uganda is coming on and everybody is waiting for that match,” Konadu told TV3.

“We know it will be difficult, no doubt [about] it, but we are ready to face the match with all seriousness [it deserves] because it’s a World Cup [qualifying match] and the approach is different from other matches.

“With the team we have now, I think we’re very difficult to beat in 90 minutes because the team is a solid one.

“I’m sure we can beat every team that comes our way.”

Ghana are chasing a fourth successive appearance at the World Cup after appearances in Germany 2006, South Africa 2010 and Brazil 2014.

0 comments on “Ghana is too strong for Uganda- Konadu”

Are you working from home right now, but not able to bring your productivity levels back to how it was at work? Well, working from home might sound fun, but it does come with its share of challenges. Keeping away from distractions, not being able to stop, finding the right space or even having the […]

Create your own home-entertainment with the HUAWEI Nova 5T

When it comes to a smartphone, everyone has a list of the same key features. Be it camera or display or sometimes even additional accessories, each of these are well-known by many of us and these are the things we look out for when buying a new device. However, the HUAWEI nova 5T, Huawei’s latest […]

Opinion: It is dangerous to block citizen’s access in COVID-19 pandemic

Paradigm Initiative has urged the government of Ghana and Nigeria not to block the telephone lines or access of citizens to emergency services in this critical time. A statement released by Ghana’s Ministry of Communications alleged that over 99% of calls made to the emergency line provided for COVID-19 response were prank calls and that […]

Russia sends plane full of medical supplies to US

Russia has dispatched a cargo plane with masks and medical equipment to the US after Donald Trump accepted an offer of humanitarian aid from Vladimir Putin to fight the coronavirus outbreak.

The National Youth Authority (NYA) has launched a spirited nationwide youth campaign against the coronavirus pandemic. This is imperative as a result of the increasing threat posed by COVID-19 to humanity and the need to scale up public awareness and education.