*AS COMMUNITY DEFECATES OPENLY ON PARK 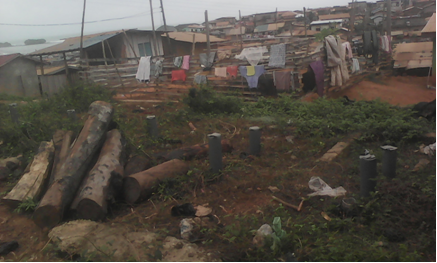 The Fisheries department has surprisingly stopped an ultra-modern toilet facility that was initiated by the Axim Youth Alliance through self-help.

Speaking to Newslinegh on the matter, the President of the youth alliance (AYA) Kofi Arko Nokoe lamented how the Fisheries Department sent the group and himself to court, and consequently stopped the project which was about 30% ongoing.

He said people in authority in that part of Ghana are making all efforts to hinder progress of the group and prevent development activities underway, because they feel being exposed by the speed at which the development projects are going on.

However, the efforts and struggle of the youth group is intended to augment the developmental effort, which is much needed in the community.

It would be recalled that, the Fisheries Commission per the District Fisheries Officer, Axim on the 29th June, 2015 summoned the Axim Youth Alliance (AYA) and its President, Kofi Arko Nokoe and the Secretary, Solomon Eshun; which case the Fisheries Commission was claiming ownership to that particular parcel of land on which the ultra-modern toilet facility was initiated.

He therefore appealed to the President and all stakeholders to come to the aid of the community to help them continue with the project, which in any case is being fully financed by the Alliance for the community.

A visit to the site showed the project overtaken by weed. The community dwellers and traders who come from all walks of life openly defecates on the community park assigned for recreation and other activities, putting the facility in a very unusable and sorry state.

In a reaction to this particular issue, the Municipal Chief Executive for Axim indicated that the matter has not come to his notice, even though the youth expressed surprise at the reaction of the MCE alluding that officers from the Assembly even came to witness against the group in open court.

Sections of the community are questioning what the Assembly has done for the community, for it to rather prevent a laudable initiative by the youth group.

They lamented that toilet facility has been a major problem of a big town like Axim for years, with neither the Assembly, Traditional Council which is holding the chieftaincy fort of the town, nor any authority coming to the aid of the community in that regard.

Listen UP: Jeremy out with debut single, ‘My Baby’

Jeremy, who is a first male child, was born and raised in Teshie-Nungua by his parents, in a family of 5. He discovered his love for music at the tender age of 3, when he began to sing at church and then primary school. In secondary school he helped organise a team from Presec Legon […]

International soccer star Didier Drogba has helped his birthplace, Côte d’Ivoire, strike gold by helping to collect MOUs for a total of $15 billion in commitments to back tourism projects in the west African country.

Africanacity: A celebration of Africa’s ability to turn every challenge into an opportunity #WeLoveAfricanacity

There is a spirit across the continent that is unmatched elsewhere. It is largely unspoken, a feeling and way of thinking that allows us to say with the greatest of confidence that Africa’s future is bright, and that we can do anything we set our minds to.

Deontay Wilder has been medically banned for the next six-weeks following his brutal defeat to Tyson Fury.